I must confess that until yesterday, I had never seen the famous Lon Chaney Sr. version of Phantom of the Opera (1925) in its entirety.  Well, I finally got to experience it…..with all the bells and whistles that organist/accompanist Bill Field could muster.  What a treat!

The Old Town Music Hall was created during the 1960’s when organists Bill Coffman and Bill Field bought a 1925 Wurlitzer organ and reinstalled it at the El Segundo State Theater, which had opened in 1921 as a silent movie theater.  The “Two Bills” were determined to continue that cinematic tradition, and opened what became the Old Town Music Hall in 1968.

Bill Coffman has since passed away.  But Bill Field, who is in his mid 70’s, dutifully rolls down the main theatre aisle on his electric wheelchair Fridays, Saturdays, and Sundays to provide a one-of-a kind entertainment on the 2,600 pipe Wurlitzer.  Yesterday, the 1925 silent film Phantom of the Opera was shown, and Field provided the accompaniment–without sheet music–for the entire movie.

But first, there was a preview!

I love the description used in a 2013 article from Off-Ramp:  “The Old Town Music Hall’s Mighty Wurlitzer is like the fun uncle of the music world.”  That’s an understatement!  Before the main feature, Field began his show with a demonstration of the Wurlitzer.  The movie curtain opened to reveal the mechanics decorated with glow-in-the-dark paint.  Turn on the black lights, and the fun began!

Afterwards, the audience was treated to some bouncing ball singalongs projected onto the screen, including an old Halloween cartoon called Boos in the Night (pun intended).

Then came the main attraction, The Phantom.  (By the way, the uncut 1925 version is the one to watch.  It includes a glorious colorized set piece where The Phantom shows up at a costume party in a crimson Red Death outfit.)

With every scene, Field provided both music and sound effects.  When a doorbell sounded in the depths of the Phantom’s caverns, the organist would ring a bell.  When the famous scene with the falling chandelier came up, sparklers set up along the walls of the theater went off.  It was better than the Rocky Horror Picture Show!  So much fun, and I would definitely go again.

The Old Town Music Hall shows both silent and talking classic movies.  Offerings for the remainder of 2016 will include:

Here are some photos I took yesterday:

A chandelier inside the main theater. 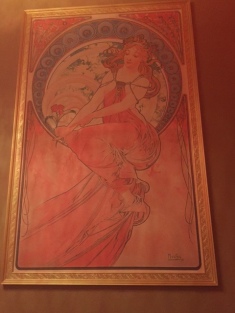 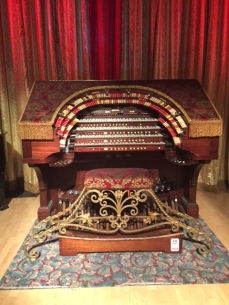 Hey, I met an old friend in the lobby!